Rate your experience of Hospital Care on Hospitals Rated – Lets help prevent more of this:

A hospital criticised over high mortality rates failed to protect patients from a fatal legionella infestation, a court has heard.

Two patients died in 2007 and 2010 after contracting Legionnaires’ disease at Basildon Hospital in Essex. Six more were infected during the same period.

The hospital admitted failings under the Health and Safety at Work Act in January and is expected to be sentenced at Chelmsford Crown Court on Wednesday.

It said it “apologised unreservedly”.

The charge the hospital is being sentenced for relates to a breach of Section 3 of the Health & Safety at Work Act over failing to protect visitors and patients.

Prosecutor Pascal Bates said the hospital, one of 14 named by NHS England medical director Professor Sir Bruce Keogh’s report into abnormally high numbers of deaths, had been battling the disease, which effects the lungs, for up to 15 years.

But despite a previous prosecution following a death in 2002 managers took insufficient steps to protect the public, the sentencing hearing was told. 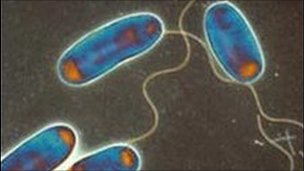 The hospital said no cases of Legionnaire’s disease, which attacks the lungs, had occurred since 2011.

Mr Bates said: “This wasn’t a situation where for a brief period of time the hospital followed advice from a particular consultant which later turned out to be wrong.

“This was a lengthy period of time during which the hospital fell short of its responsibilities and failed its patients.”

The court heard the hospital cut spending on chemical treatment of the water system in 2006 and 2007 in an “inappropriate cost saving measure”.

Shower heads and thermostatic mixing valves, which can contribute to the spread of legionella, were not properly cleaned, the hearing was told.

Other errors included “super heating” hot water pipes in an attempt to kill the bug – a measure which could have inadvertently caused the bacteria to proliferate in cold water pipes which ran alongside.

The court heard subsequent risk assessments may have been an exercise in minimising legal culpability rather than protecting patients.

Iain Daniels, mitigating on behalf of the Basildon and Thurrock University Hospitals NHS Trust, said: “The hospital apologises unreservedly for the chronic colonisation of its water systems over this period.

“The trust acknowledges it failed to provide a safe environment but this has not been through a want of effort, funds or desire.”

Rate Your Experience of Hospital Care on Hospitals Rated

Posted in News
Rate Your Hospital: